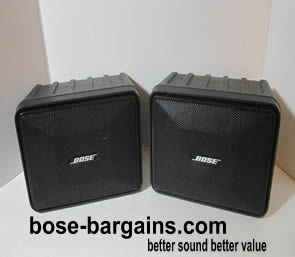 When shopping for speakers, one term you will encounter frequently is Full Range. This term is intended to let the buyer know the speaker is capable of reproducing all, or most, of the audio frequencies humans are capable of hearing, without the need for additional equipment. In comparison, some speakers, such as subwoofers and micro-cube speakers, are only capable of reproducing a limited range of frequencies. Sound is measured in units called hertz (Hz), defined as the number of times a sound wave rises and falls from its highest to lowest points in a single second. The higher the measurement, the higher the sound. Humans are generally capable of hearing sounds ranging from 20 Hz on the low end to 20,000 Hz on the high end. To help put this into context, the lowest note on a grand piano is around 33 Hz, and the highest note created by a violin is around 16,000 Hz. A full-range speaker should be capable of reproducing most, if not all, of these frequencies.

These are the Bose 101 music monitors come in black or white.  They can be used indoors or out (dry areas) only. For full wet areas you need the Bose 151 or Bose 251 compact plastic cabinets light weight wall mounts included when new. Great value monitors were updated with series 2 which look identical.  Series 2 has an extra 5 watts per cabinet.